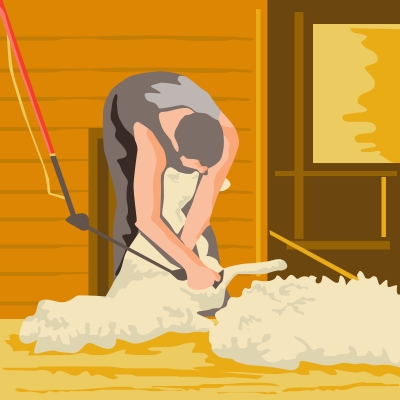 This little story is a period in my life going back over sixty years. The lessons are still applicable today.  It relates to perfection and accepting new ideas and new methods.

Today we live in fast changing society, any one that ignores this fact, is left behind. The readers of my blogs may have picked up the fact, my backgrounds was in the farming field.  I was born on a farm and except for the period of my life serving with British Royal Marines.  I worked on the farm my father owned, farmed in my own right for thirty years.  I haven’t had a sea change I have had an oceans change.   The reason for the change is another story, it would take up several blogs.  It would be full of lessons and experiences.  Your comment on them, may lead to the conclusion, I’m a slow learner.  It was full of stress, anxiety and frustration.

This was back when my father was alive. It was what is described as a mixed farm. Meaning sheep cattle and various crops.  The sheep contingent was relatively small.  There is a lot of work managing a flock of sheep. Especially at shearing time.  My father hired an outside contractor to shear the sheep.  The man shearing the sheep had shorn sheep all his working life, he was considered reasonably efficient.  He worked relatively stress free.  My job was lapping up the wool and being generally useful.  To give the shearer a break I lent a hand to shear the odd sheep.  I was basically inefficient and did not do a very good job.

I was a member of the local young farmer club. One evening we had a shearing demonstration by a professional shearer. He was trained by Geoffrey Bowen the New Zealand world champion.  New Zealand has over seventy million sheep, a human population of approximately three and a half million.  Sheep is a major part of the New Zealand economy.  They had perfected sheep shearing to perfection.  It is the ultimate in work study.  Which takes away much of the stress.   First we watched the demonstration, then we had a turns  shearing.  Instructed and supervised by the professional.

The next day I shore sheep faster than the man who had been shearing sheep all his working life.   With far less stress. It’s interesting that the man who was shearing our flock did not want to learn the more efficient method.  It’s the ultimate in work study it takes away much of the stress.  One of the certainties in life there will be change, whether we like it or not.  This in it’s self creates stress and anxiety.

Change is accelerating and we have to go along with it, or we will be left behind. It will create stress and anxiety.  It’s a fact of life.

Many thanks to free digital images for the photo